Data visualization from a solar powerplant in Kuwait

For the Ministry of Education in Kuwait we have implemented a data visualization from a solar powerplant located at a school in Kuwait. 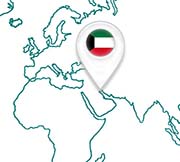 The LCD monitor in the lobby displays information about:

Such information presented to public help to build a better image of an institution that not only saves money but also tries to behave more environmentally friendly by producing energy without emissions.

Why did they choose Czech company Solar Monitor s.r.o. in Kuwait?

Because our solution is:

How it works in reality

The solar powerplant itself (PV panels, inverters, electricity meters…) is assembled by a local Kuwaiti installation company. Solar Monitor supplies SM2-MU HW units that the installation company connects to inverters and meters. The SM2-MU continuously read data from electricity meters and inverters and then enable to accesses the data via standard web browser (e.g. Chrome, Firefox…).

The part visible for public is an LCD monitor with a built-in web browser (available in most electronics stores). Solar Monitor sends data (xml, HTML, CSS, Java Script) online to this LCD which displays data in graphs on the screen. Data appear on three graphic pages that alternate at regular intervals, namely: