Collecting, sending and displaying data from power production and consumption are the main features of Solar Monitor. The competitive advantage is that data is processed almost real-time. The word 'almost' is important. Indeed, the laws of physics do not allow things to happen in no time. A certain time period is always necessary, which is true not only for our products, but practically everywhere. Both current and long-term trend is to shorten these technical delays, to accelerate processes and increase the volume of transmitted data. In addition, if you can save space for HW, it is the right solution. Solar Monitor s.r.o. is a modern company aware of current trends. That's why we have developed a new version of the SM2-GSM module, which is characterized by:

How do we speed up communication?

The SM2-GSM provides two-way data transfer via the GSM network of mobile phones where the Internet is not available. For data transmission, the older unit used outdated service of mobile operators called GPRS, which on the one hand is characterized by very good signal coverage, but on the other hand, by lower data transmission speed. Real-time download speed rarely exceeded 50 Kbits / s, most time it was much slower. The speed of sending data is even lower because GPRS is originally designed for downloading web pages rather than sending large volumes of data. However, Solar Monitor system focuses on sending data.

Modernized SM2-GSM units now support advanced data transfer technology, known as LTE (4G), UMTS / HSDPA (3G). The terminology in this area is rather unclear. Further on in this article we will only use the term LTE, meaning today's fast internet through mobile phone network operators.

LTE data rates are no longer in kilobits, as was the case with GPRS, but in megabits. Theoretically, it is possible for LTE to reach about 150 Mbits / s for downloading and 50 Mbits / s for sending, but in reality maximums are tens of megabits per second. Even in worse conditions (poor signal and high traffic), this is without exaggeration a generational leap, which will have a noticeable effect on the actual speed of communication. LTE is a technology supported by mobile operators around the world. However, it is not available at all places with mobile phone coverage. But SM2-GSM units are mostly not used as mobile, they are installed stationary and it is not difficult to check the availability of the LTE signal at the planned SM2-GSM installation. In addition, if LTE is unavailable, the communication itself switches to GPRS or EDGE (slightly faster than GPRS, but not as much as LTE). 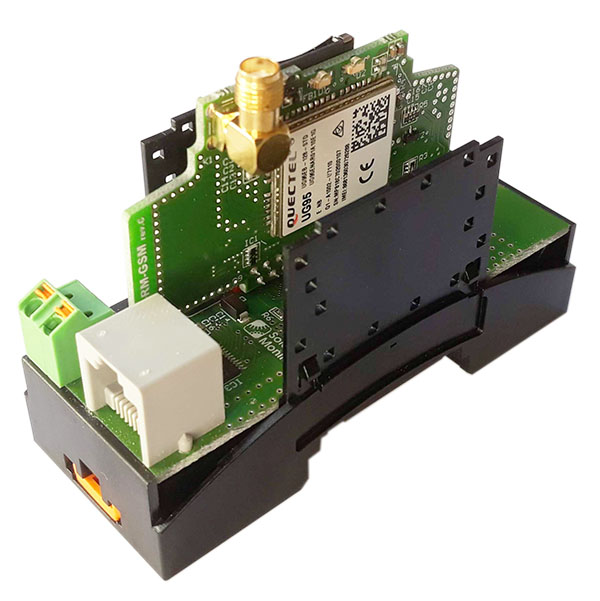 The SM2-GSM unit is already a module extending the Solar Monitor system to transmit data through mobile operator networks. However, the unit itself is also a modular construction. It consists of a base plate and a vertical module containing a mobile phone unit. Thanks to this sophisticated concept, it has been possible to save space on the DIN rail, to access the SIM card slot easily, but above all, it is possible to easily exchange one type of mobile unit with another.

The newly designed SM2-GSM-xxx unit will bring you a noticeable acceleration of data transfer, easier access to the SIM card, and also saves space on the DIN rail. If some of our customers are happy with current speeds, we've improved GPRS units for them. They will also get new smaller boxes with better SIM card access for the same price. For LTE, customers logically pay extra, but only a little over one thousand crowns, which is a completely negligible increase in price compared to better convenience they get.