The PLC is predestined for consumption management in relation to the power production. Possibility of PLC programming depending on particular situation enables that. Programmability is undoubtedly a huge advantage, nevertheless it also requires the time and cost of development.

Real situation of managing both production system and power consumption

A situation using a sole PLC

To save time and money for development, the installation company will use some of the battery charging control systems, such as Studer-Innotec. This eliminates the many tasks a PLC programmer would face. Studer-Innotec can control the accumulators charging in the event of a production surplus in relation to current consumption. On the other hand, with higher consumption not covered by PV production, it will supply current from accumulators. Thus, one part of the assignment is resolved. It "only" remains to solve the switching of postponable appliances (e.g. boiler, electric vehicle charging…) based on the set priorities.

The PLC programmer chooses e.g. Mosaic SW and starts programming. He will have to learn to communicate with all systems in a grid. For example, with the Studer-Innotec battery management system to read the accumulator charging status and control the inverters production ... Next with the electric car charging station to monitor the car's battery status and set up charging in order to use power produced by PV plant efficiently. If there are any electrometers or other inverters in the grid, the programmer will have to make PLC read the data, or pass it on (control). Occasionally, it will be Modbus communication, sometimes SNMP or even S0 pulses (e.g. with electrometers).

Once the programmer has finished everything, God forbid one of the above mentioned components broke down and was replaced by another type. The programmer's nightmare would start again as he would be forced to learn to communicate with this new type as soon as possible, because until the new component can communicate with the system, the system as a whole does not function properly.

Is this the only available solution? Fortunately it is not! The use of Solar Monitor as a PLC helper is more efficient and modern, cheaper and easily scalable solution. 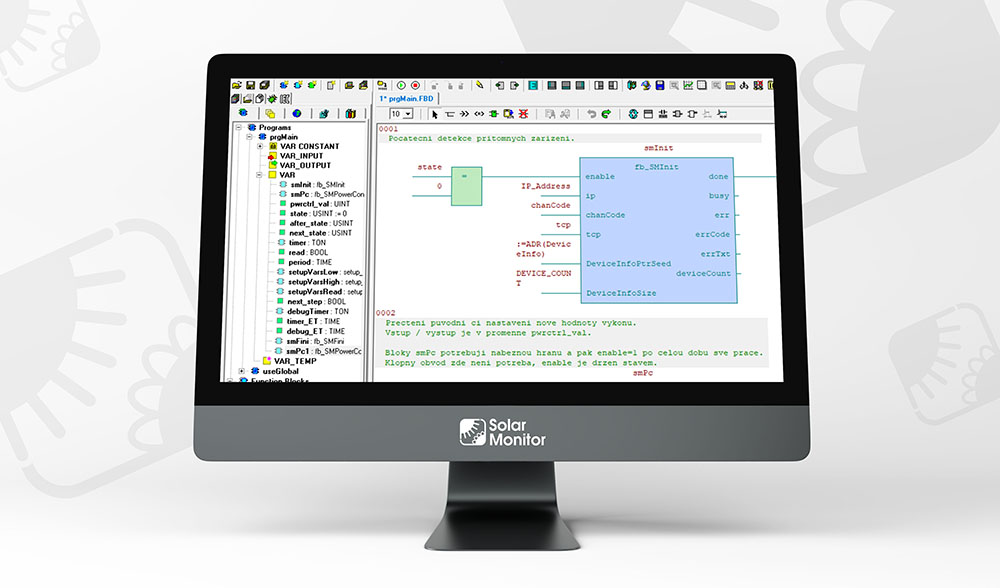 Solar Monitor offers a comprehensive data collection solution from a large number of devices (inverters, electricity meters, battery management systems such as Studer-Innotec, temperature and exposure sensors, etc.). In addition, it can also communicate with PLCs using sophisticated libraries that use the Modbus protocol with SunSpec. As a result, the Solar Monitor can save the programmer a huge amount of time and effort.

How does Solar Monitor simplify the work of PLC programmers?

The PLC programmer only needs to use the intuitive and logically designed Solar Monitor library to communicate with all devices connected to the Solar Monitor. Solar Monitor enables the communication with various products from numerous manufacturers. This not only significantly reduces the time required for the initial programming of the PLC, but also makes it easy to add another component (inverter, electrometer, electric car charging station…) to the control system.

How do Solar Monitor Libraries work?

Single function blocks of the library are designed according to their purpose, not according to the manufacturer. The PLC programmer adds a Solar Monitor library to his development environment (e.g. Mosaic). Solar Monitor Library can be download from the web for free. If the programmer has an SM2-MU HW unit on his Ethernet network, then he can use any of the function blocks. Specifically, he could use the fb_SMReadWriteParameter function block to read or write a parameter. This parameter might be:

The library, together with the Solar Monitor unit, will carry out a large number of operations to provide the PLC programmer with maximum service, but it does not limit him in development.

What function blocks does the Solar Monitor library offer?

Raw data displayed only in plain numbers do not seem very comprehensible to most people. If you display the data in graphs, their explanatory value is much higher. Solar Monitor not only converts this data into graphs, but can also display multiple related values in one graph at a time. For example, one graph shows values of photovoltaic power production, consumption of the object, battery charging status... 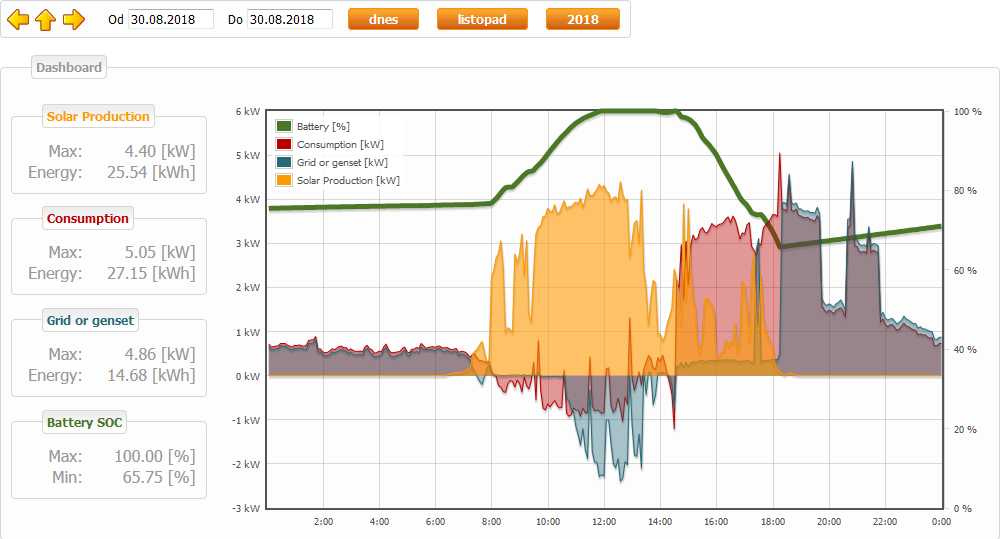 The project Energy Gateway for Renewables is provided with financial support from the European Union.