Solar Monitor: the gateway to automation of electricity usage 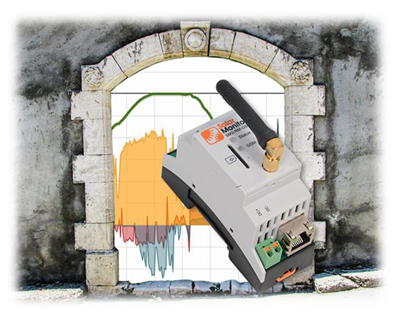 The article deals with the automation of electricity consumption in relation to its production by means of photovoltaic panels, whose output depends on the sun. Solar Monitor offers an wide range of solutions that adapt very easily to investor's particular requirements.

Why is automation a good idea?

Producing electricity is one thing but its usage and storage is another issue. Electricity consumption is not constant, it varies depending on many factors. E.g. if there is no one at home, consumption can be significantly lower than when the family comes, starts to cook, switches on the lights…Producing your own electricity with photovoltaic panels and using invertors to let it into 220 V electricity distribution system is one of the cheapest ways to produce electricity these days. That is the reason why number of buildings with independent electricity production is rising. However, photovoltaic energy production is unstable due to unstable intensity of sunlight. Controlling consumption of electricity in relation to its current production is nowhere as near technologically sophisticated as it deserves.Is there anyone who would not want his appliances to use the energy produced from his own photovoltaic panels instead of paying substantial amounts to distributor?In the world of automation, turning on appliances with high energy consumption (boilers, heaters…) manually doesn't make sense. People today and in the future even more so acquire smart systems that will control the technologies themselves according to requirements, after evaluating the automatically collected data. Systems that, based on automatically collected data, decide when it is best time to heat up water, charge batteries, etc.

What difficulties are we facing nowadays?

Nowadays it is not a problem to measure energy currently produced and consumed, we have electrometers capable of providing real-time data. There is no problem collecting digital data from inverters, sunlight sensors.... E.g. Studer-Innotec systems enable efficient control of electricity storage in accumulators. They can also provide accumulator's data such as charging level or temperature. There is also a large number of programmable logic controllers (PLCs) available on the market, they are designed to control electrical appliances. So what exactly is the problem?
The problems are:

3. the difficulty of integrating system made by other producer promptly

How do Solar Monitor's systems help? 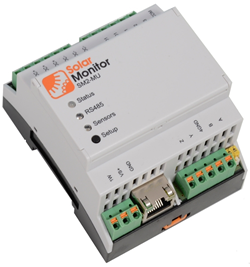 Our SM2 units can collect data from a large number of electometers, inverters… made by numerous manufacturers. When designing and repairing a system, the investor is not constrained to a single supplier and can combine different products from different suppliers over the system's lifetime. Our system can display the collected data graphically and user-friendly in a web browser (Chrome, Firefox…) or in a phone application. With Studer-Innotec, our solution offers two-way communication, monitoring and configuring your entire system in real-time from the comfort of your office.

To enable easy and fast integration into any programmable controller, we have written the ST language library (IEC 61131-3), which further simplifies the use of the entire system. The library provides function blocks for both data reading, recording any parameters and power control. The library can be expanded to fit your needs.

What technologies does Solar Monitor system use?

We collect data from electrometers, inverters etc. via:

Our customers can communicate with Solar Monitor in both directions via:

The following protocols are used for communication: 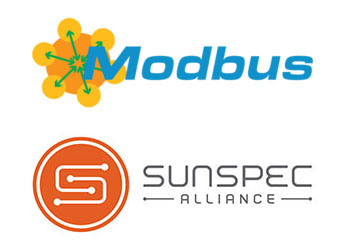 We don't want our customers to spend a fortune, so you don't have to buy something you will never use. You can assemble our products into a configuration that is most economical for your particular situation, and you can expand the system at any time if the situation changes in the future. Every single HW part of the Solar Monitor system can communicate with each other on their own HBUS, which is hidden smartly so that it does not protrude even when mounted on a DIN rail.

Why is Solar Monitor's future so promising?

Because the system has been designed from the start to be multifunctional, with wide range of uses. It is not constrained to a particular manufacturer and certainly not to particular products. Thanks to elaborated HW and SW concept, which assumes rapid development in this area, it is not difficult to add more expansion modules to HW and to implement other types of input and output data into the SW. Thanks to a sophisticated library system, it is relatively easy to add completely new data from an device (meter, inverter, PLC…) that is not yet supported.

The project Energy Gateway for Renewables is provided with financial support from the European Union.